Our everyday life-world consists of concrete “phenomena”. It consists of people, of animals, of flowers, trees and forests, of stone, earth, wood and water, of towns, streets and houses, doors, windows and furnitu­re. And it consists of sun, moon and stars, of drifting clouds, of night and day and changing seasons. But is also comprises more intangible phenomena such as feelings. […] The concrete things which constitute our given world are interrelated in complex and perhaps contradictory ways. Some of the phenomena may for instance comprise others. The forest consists of trees, and the town is made up of houses. “Landscape” is such a comprehensive phenomenon. In general we may say that some phenomena form an “environment” to others. A concrete term for environment is “place”. It is common usage to say that acts and occurrences take place. In fact, it is meaningless to imagi­ne any happening without reference to a locality. Place is evidently an integral part of existence!
(Norberg-Schulz C., “Genius Loci. Towards a phenomenology of architecture”, Milano, Rizzoli, 1980, pag.6).

With these words the architect and architectural theorist Norberg- Schulz began his reflection on the concept of “place” and on the rela­tionship that it has with the working out of our “phenomenic” life. Even the most common actions such as sleeping or eating, continues the ar­chitect, always happen in a place that has a character and peculiarities which make it unique compared to any other. We are hence in front of the Genius Loci, the natural entity tied to a place and worship object in the Roman tradition, which Norberg-Schulz evokes to justify the in­dissoluble connection between all forms of action and where they take place. Then, when a simple mechanical action is replaced by a more detailed and complex one like the artistic production, the link between place and action appears even stronger.

Art uses the space, both natural and man-made, like a canvas but at the same time it is the place that characterize the art work, creating an indissoluble link between the two entities. In this number OFFICINA* investigates the intricate mechanisms that underline these processes now exacerbated by an “urban culture” that use to take possession of the place, to transform it irreversibly and to abandon it when it is no longer useful. In a passage from natural to man-made, the number presents different relationships and contaminations between art forms such as sculpture, theater, film and street art and the place in which these wor­ks take place. The dossier is opened by the contributions of Arte Sella and Dolomiti Contemporanee that embody the ideal of complete fusion between art and nature; then follows the contribution of Venice Open Stage and Lago Film Fest, two festivals that identify in the participa­tion of the city and of the community a characteristic trait, to close with the themes of Urban Masking and writing in which the city, or its ruins, are the main stage for the artistic performance. 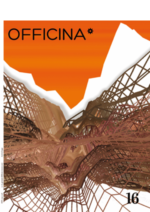