“The soil is a limited resource whose formation time is generally very long but which can be physically destroyed or altered chemically and biologically in a very short time, despite its resilience, until the loss of its functions. Key component of the land resources, of agricultural development and ecological sustainability, the soil forms the basis of food, fodder, fuel and fiber production” (ISPRA, 2017). This is how the Report on Soil Consumption, drawn up by ISPRA in 2017, begins as if to indicate that, among all the resources, soil is the essential element for the production of almost everything man needs. Not just food, but also raw materials essential for industrial production and for our subsistence and prosperity. Despite the proposed European law to reduce soil consumption to zero by 2050, the key data emerging from the report is that soil consumption is still increasing, both in Italy and in Europe. Today in Italy, about 3 m2 of land per second is consumed, a value that is lower if compared to the 7-8 m2/s of the 2000, but soil consumption is still growing, thus affecting surfaces that can not be restored except in very long times.
The number 20 of OFFICINA*, the last of the cycle on climate change, deals with the usual dichotomy that characterized the three previous numbers: on the one hand the soil will be read as a resource threatened by human action, an endangered wealth, often abused or exploited without control; on the other hand it will be analyzed as an essential raw material to allow the development and growth of humanity. Its use, if accompanied by appropriate techniques, can return to find the balance necessary for our and our Planet’s survival. Emilio Antoniol 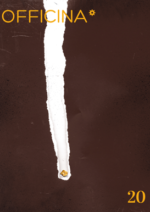