Among the Operette Morali written by Giacomo Leopardi between 1824 and 1832, one introduces in an exemplary way the themes investigate in this issue. It is the Dialogo della Natura e di un Islandese in which an Icelandic traveler, exhausted by the sufferings of a unfortunate life, begins a long journey “to see if in any part of the world not offending I could not be offended, and not enjoying, not suffering”.
The fate leads him in Africa where, in spite of himself, he meets the Nature, a huge female figure, beautiful but with an austere expression, that ask him why he had gone so far from his home. The Icelandic begins a long story in which he illustrates to the Nature all the unfortunate situations he encountered on his journey: from territories sunk by the sun, to those continually suffocated by rains, to those tormented by volcanoes and earthquakes; and in every place there were wild beasts, insects and diseases that have made his life a continuous suffering, coming to “conclude that you [Nature] are the enemy of men, and of other animals, and of all your works”. The Nature, contemptuous, responds to the traveler that the world she has generated has not been made for the happiness or use of men and that any offense or favor towards them is only the consequence of a larger project. The answer of the Icelandic is one of the most successful allegories of Leopardi’s production, bringing as example the case in which a guest is invited by the landlord to stay at his home. Also in this case the house is not built for the service of the guest but, since the invitation has come from the landlord, it is his duty to allow the guest to live there “at least without labor and without danger”. To this provocation the Nature, with even harsher tones, replies: “It seems that you have not minded that the life of this universe is a perpetual circuit of production and destruction, connected both with each other, and that each one continually serves the other to the conservation of the world”.
The unanswered question “who likes it and who benefits it?” with which the Icelandic leaves us, before the tragic end reserved to him by Leopardi, is the moral fulcrum around which the entire operetta is based. On the one hand, it recalls the mechanistic theories typical of epicureanism, taking up themes from the De Rerum Natura by Tito Lucrezio Caro, however, dyed by the typical pessimism of the Recanati poet. The generative Venus, pleasure of men and Gods (hominùm divòmque volùptas), invoked by Lucretius in the proem of the work, give place, in Leopardi, to a stiff Nature, with a “beautiful and terrible” face, and regardless of men. A Nature that relies on the cyclicity of events, in which what is destroyed is the rebirth basis for what will come later. In this scenario OFFICINA* 21 has investigated the relationship between man and the generating Nature: the Earth, the house that She give us to live becomes for us less welcoming and even more dangerous, resources become scarcer and to survive man must learn to produce what they needs by imitating Nature and adapting themself to the rules She imposes us. Emilio Antoniol 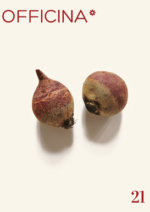