On April the 15th 2019, at 7:45 pm, media from all over the world broadcast live the collapse of the spire, the flèche, of the Notre-Dame Cathedral in Paris due to the fire that, a few hours before, flared up in the roof of the monument that is UNESCO World Heritage Site since 1991. Built in the 12th century and survived at two World Wars, the symbol of the city of Paris was undergoing restoration works due to problems related to the conservation of the roof. The fire broke out inside the restoration site, causing the complete collapse of the fourteenth-century roof and the partial collapse of the vault of the central nave, thus causing damage even inside the building. But, surely, it is the image of the spire that collapsed in the flames that is still alive in thousands of unarmed spectators.
Immediately the manifestations of regret for the great loss and the fundraising for the reconstruction appeared on the media. But above all, different opinions regarding the reconstruction modalities, that see the supporters of “where it was and how it was” idea as opposed to who, like the French minister Édouard Philippe, propose an international design competition for the reconstruction of the collapsed spire, have been proposed. Even before the fire was extinguished, the possibility of placing a “copy” of the spire on top of the cathedral triggered the debate between architects, politicians and citizens who felt deprived of one of the symbols of the city.
However the history of the spire is more complex than you might think. The steeple burnt on April the 15th was in fact built only in 1860 by the carpenter Bellu, and designed by the architect Eugène Viollet-le-Duc. The spire replaced a previous tower, built in 1250 and demolished at the end of the 18th century. Compared to the “original” spire, the one designed by Viollet-le-Duc presented numerous differences: the Gothic forms were inspired by the spire of the Orléans Cathedral and doesn’t have the function of bell tower as the original one. For that reason the three original bells was eliminated in the nineteenth-century project, and in their place was placed a copper statue of a rooster, while on the four sides of the spire where placed the copper statues of the twelve apostles and of the four evangelists. Between them, the statue of St. Thomas had the appearance of the architect Viollet-le-Duc turned back to the city, looking towards the spire to admire his work.
The destroyed spire is therefore an imitation of previous artifacts and is the result of the suggestions and ideas of an eclectic mind like the Viollet-le-Duc’s one. The fate wanted that only a few days before the fire, at the start of the restoration process, the statues of the apostles have been removed and have therefore been saved. No one can know if Viollet-le-Duc will return to admire the new spire, which will replace the burned one, or if its place will be taken by someone else!
In this issue OFFICINA* investigates the concept of imitation, in its different values, both negative and positive, since a copy is not always worse than the original and, almost never, an original has not a reference from which it takes inspiration. Emilio Antoniol 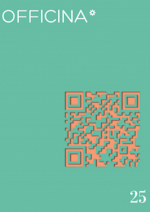