The inner areas, that are those characterized by a significant distance from the essential public services (health, education, public transport), represent roughly 60% of the whole Italian territory and are inhabited by more than 13 million people; however, for several years, they have been facing depopulation and impoverishment dynamics, in favor of a growing concentration in urban agglomerations.
OFFICINA* 29 issue presented solutions and innovative architectural practices in response to the fragility of densely populated areas. Conversely, with a few commendable exceptions, the debate on inner areas has so far almost exclusively focused on enhancing tourism potential or on strengthening resilience with respect to catastrophic events, such as earthquakes and floods, and to the foreseeable consequences of climate change. In our country, the reflections on the relationship between “city” and “countryside”, which today could better describe the evolution of society, have always been in the background compared to the discussion on the North-South imbalance. According to Fabrizio Barca, who served as Ministro della Coesione Territoriale and who conceived the National Strategy for Inner Areas, “a citizen of an alpine valley in the province of Cuneo finds it much less difficult to deal with a citizen of Sila than a citizen of Turin does with one of Reggio Calabria”. Paradoxically, during the most critical phases of the pandemic, authoritative commentators described the “small villages” as happy islands, in which the lower population density reduces the risk of contagion, neglecting the fact that they were also dramatically far from the main health centers and were not covered by broadband, necessary for both smart working and distance learning. The ecological transition itself, reportedly desired by everyone and apparently more accessible in the inner areas thanks to the vast natural heritage (16% of the Apennine surface is protected, a record at European level), risks being even penalizing in those areas, because the economic context is less permeable to change than that of conurbations.
The contributions of this issue of OFFICINA* are the result of the debate revived since few years, also at a scientific level, on the inner areas: they describe some “place-based” development initiatives and trajectories, that are literally flourishing throughout Italy. It emerges that the co-planning of different entities (local bodies, associations, practitioners, artists) is fundamental for the development and implementation of virtuous strategies, such as the regeneration of the architectural heritage of urban villages and rural settlements, the definition of a new territorial institutional communication that takes into account the dynamics of ecosystems, the institution and the impacts of cultural festivals in apparently unattractive territories.
Regenerate, reactivate, re-inhabit: these are terms that often occur in the following pages, and underline how the relationship is an effective and complementary alternative to concentration, also from the point of view of land management. However, it must be accompanied by new and more widespread citizenship services: in this way the “margin” can become, as Antonio De Rossi writes in his fundamental book Riabitare l’Italia, not surprisingly mentioned several times by the authors, “space of the possible, of building the future”. Michele Gaspari 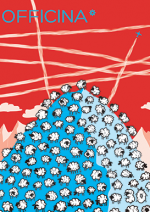