The energy crisis of 1973 had a major impact on the global economic trends: if, on the one hand, it slowed down the economic development of the Western world that had characterized the 50s and 60s, on the other hand it encouraged the rise of an “ecological thinking”, characterized by its criticism of the capitalist economic model. The proposed alternative was substantially targeted on degrowth (André Gorz, Nicholas Georgescu-Roegen, Ivan Illich), that is to say on the need for a change in society’s behaviors requiring various types of sacrifices: reduction of consumption, reduction of travel, disincentive of the free market, autarky, and in general a reduction in the freedom of modern man.
Almost 50 years later, it is the COVID-19 health crisis that shows us the possibility of living in a different way by renouncing – albeit with many sacrifices – to some behaviors for long criticized by ecological thinking. The hope, once we will have left behind the health emergency, is the internalization of a new normality based on the social awareness that certain attitudes and certain socio-economic contradictions are no longer sustainable. Just as shaking hands will no longer be a mere ritual, but will once again become a willing engagement in caring for others, and traveling will no longer be a compulsive action, but rather a choice of life experience, the new “awareness” will give us the tools to undertake a real transition towards a new economic model that cannot ignore the importance of the dimensions of social and environmental justice.
More than on sacrifices, “ecolomic” thinking therefore finds its meaning in conscious choices. Issue 33 of OFFICINA* explores a scenario where the crossover between the concepts of ecology and economy does not necessarily generate degrowth, but rather virtuous and inclusive economic models, based on growth indicators that put ecological and social well-being before mere economic evaluation.
The contributions collected in this issue are certainly not definitive answers about the positioning and form that the ecolomic model could have, but, thanks to the narrative of interesting experiences, projects and ongoing research, they aim to open up the debate and reveal the potential of conscious choices at different scales and in different dimensions of reality. The contribution of Simone Amato Cameli argues the impossibility for our society to achieve a neutral ecological footprint, taking as an example the critical issue of the use of natural resources, by showing how the highly desirable ecological transition risks to be a mere reshaping of the extractive pressure from an old to a new group of exhaustible resources (from oil to rare minerals), with consequent repercussions on the international geopolitical chessboard. The “territorial metabolism” described in Maria Leonardi’s article, as well as the “systemic design” proposed by Ajsa Aulisio and Eva Vanessa Bruno, are two strategies that exploit the driver of ecology to re-establish a model of “glocal” economic development capable of involving local actors and resources: the first in a productive way, with the re-territorialization of new industrial clusters, the second in a touristic way, thanks to the valorization of cultural landscapes. Gerardo Semprebon’s paper, on the other hand, raises the question of the world leadership struggle related to the achievement of a production model based on the concept of “Ecological Civilization” and the meaning of its possible exportation on an ideological level as well. Finally, as Federico Godino highlights, it is interesting to observe that there are “platform economies” on a global scale which, although based on immaterial infrastructure, play a decisive role in the spatial transformation of cities. Their presence can induce, accelerate or even delay development dynamics, raising issues of spatial and environmental justice, actually becoming a political actor in the governance of the territory.
Geopolitics of resources, territorial metabolisms, productive ecological models to be exported, and platform economies seem to suggest the framework of reflection within which political, public and private actors will have to confront in order to come up with concrete answers on how to direct the ongoing ecolomical transition. From this point of view, it will be essential to raise and re-direct the awareness that revealed itself on an individual level in this moment of world crisis, in order to make change possible.*  Alberto Verde and Roberto Sega 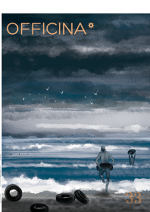