Don’t Worry, have a Method

Over time some forms of psychosis such as manias, obsessions, phobias or paranoias have taken on broader forms than their medical definition and, more colloquially, these terms are now used to refer to various forms of behaviour, sometimes even confusing them with each other. In this sense, the increasing spread of these pathologies could be associated precisely with this improper and widespread use of the terms which considerably broadens the field of application. It therefore becomes interesting to deepen the knowledge of what forms psychosis manifest themselves, how they have changed over time and above all how they can contribute to the field of research, not so much as an ultimate goal, but as a tool through which to investigate reality.
OFFICINA* conducts this investigation by focusing on paranoia, understood as an attitude, typical of an individual or a community, used to elaborate answers to the problems of an uncertain reality. Expressive languages emerge that are able to bring order to chaos, developed by man to dominate his fears and build – even in fictitious form – responses capable of giving greater stability.
Salvador Dalì, who made “paranoid-critical” behaviour a real method to bring order to the thought process, summarizes the close connection between the subconscious and reality based on paranoia with the few terms of fantômes paranoïaques authentiques (authentic paranoid ghosts), a definition with which he would also title the lecture held in 1936 on the occasion of the International Surrealist Exhibition in London. It is not important to demonstrate the existence of ghosts, but it is crucial to understand the role that such figures can have in our mind and the – real – repercussions that can occur on our behaviour. Individual paranoid attitudes can be more or less evident and the ways in which they can manifest are manifold: the greater the degree of identification with these forms, the greater the sharing of the paranoid position will be, passing from the subjectivity of the single individual to real cultural movements, therefore from individual to collective paranoia (Zoja Luigi, Paranoia, 2011). From the contributions collected in this investigation, a further distinction can be drawn: passive paranoias, which the individual acquires from third parties, and active paranoias, elaborated by an imaginative mind and capable of producing solutions and proposals to respond to the chaos of reality in a constructive way; not to be confused with the imaginative mind, which often uses paranoia to create non-real entities, generating manias or phobias. At the root of all paranoia there is a strong state of insecurity towards reality, which questions not only future prospects, but also the reliability of past sources. Paranoia leads to doubt and helps to build “tools” capable of bringing order, to give concrete answers to uncertainty. What are these tools, so called “ghosts”? In what areas can they manifest themselves? An intriguing heterogeneity emerged, from which some considerations can be drawn.
The first concerns the digital sphere, now ubiquitous in everyday life, which represents the augmented reality of each individual, from social interactions to professional activity. Although digitalization is now widely spread and used, there is no real direct and autonomous control over it by the user: whether it comes to web platforms, social networks or work programs, it is possible to move within these through pre-established tracks, an aspect that on the one hand could give security, but on the other involves a manifestation of helplessness and inability to control.
Instead, the area in which the individual can manifest his “paranoid ghost” with greater freedom is that of art, in all its forms, from painting to architecture, from music to dance. Art understood as the ability to act, offers a large degree of freedom of expression and above all the possibility of building an ad hoc language, according to the individual, and in the act of recognizing the languages of others, real cultural movements can take shape, arising not so much from the shared fear generated by paranoia, but from the well-being that art can offer, in its multitude of means.
Finally, a feature that unites many of the contributions present in this issue, although related to different areas, is the constant search for an order, or the identification of real elements (tangible or virtual), to catalog, classify and order them and, indeed, control them. In the disorder of reality, this approach can lead to the construction of a real methodology, with the aim of leading to a state of tranquillity: a goal sought after by each individual whose paths are however constructed in a different way.* Marcgherita Ferrari e Maurizia Onori 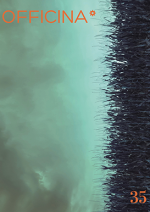