Nothing New Under the Paint

I want to think that the privilege of writing the introduction for a journal issue authorizes the detachment, for a moment, from the compilation of scientific-structured paper, skirting without losing sight of the coast, the mainland, on which it is possible to build arguments that, for the comfort of the most, would thus approach the hard science, in an anomalous and evocative navigation made up of reminiscences, observations and intuitions, however structuring a route.
Everything has been said about the Mediterranean. Within it, as first salt, narratives, conjectures and myths have come to life, repeated and infinitely transformed into a karst river that continues to flow: a magma that sometimes springs out, crystallizes in everything and its opposite.
The Mediterranean is the place capable of dangerously undermining the “less is more” statement, beloved to the architects, in favor of that overabundant stacking of tangible and intangible elements that makes everything possible. In history observers sufficiently distant from it have drawn and generated visions far from reality: sensational misunderstandings spanning centuries that worked much better as intellectual speculations and design inventions, than as analysis of the meridian realm. Even for those who can consider themselves closer to Mediterranean thought, for geographical-cultural reasons, it’s not easy to read its scheme and trend: immersed in the sea current that crosses this sea, we do not experience an adequate historical or emotional distance. In tension between Alpheus and Arethusa, in an invented flood that manipulates sources and arrival points, we can at best risk inter-subjective chronicles in the manner of pilot books: hybrid nautical charts, with a measurable and narrative component, useful for recognizing an area, not to lose a route, to identify a destination or, in case of danger, at least return to a safe harbor.
Along the edges of this measurable but difficult condition, myth and past, very cumbersome components dealing with the Mediterranean, often take over in favor of a marked and comforting celebration of an identity of being rather than doing.
Traveling between Italy and Greece I was fascinated as a child by the ships I embarked on: how was it possible that mankind could combine materials, techniques, aspirations and build those white steel machines, blinding under the sun and dreaming of the night with their lights? I loved looking at the lights of the coast from the deck, through the horizontal currents of the protections, almost always observable, crossing sea arms that can be measured with the eye and comfortably homologous. The ferries had mythological names, of ancient pre-classical toponyms and mostly Minoan heroes – once again the supremacy of the past – but they hid a very different origin: other enigmatic letterings, in distant alphabets, were observable on hatches or under the white paint, legible in relief. What a shock to learn on board, and from confidential revelations, that those same ships, apparently so ineluctably Mediterranean and brand new, were nothing more than much older ferries, brought there from the Rising Sun, transformed by carpenters of modest shipyards in the Bay of Salamis. There it is the Mediterranean deception! Still the karst river of continuous and disguised transformation. Once again the renaming of the same entity (a vessel, in this case, in the place of a god or a hero) pre-existing, taken elsewhere, transformed. Thinking back, on board those ships a child experienced, in a nutshell, the same trauma from unexpected evidence of the polychromy of the Greek finds when in the nineteenth century archaeologists systematically studied the evidence of antiquity. At the same time, these findings and childhood memories already revealed up-cycling and circular economy practices on a large scale (we are talking about the main commercial fleets in the Mediterranean).
It is by looking at this attitude that OFFICINA* 37 has collected papers that move the pace of research from a retrospective route to a visionary perspective, to describe the marked contemporaneity of a premonitory Mediterranean. At the beginning of this third millennium – but already in previous decades – in the folds of Mediterranean history and geography it is possible to decipher a certain anticipation of paradigms that are only later recognized, codified and, in some way, even branded as new.
Thinking about circular practices does not only mean, however, only intervening in the economic and production fields. The paradigm presupposes the refinement of reuse skills that transcend tangible production and cross over into the intangible context of the thought. This issue is an opportunity to make a point of reuse speculations, even apparently less striking and far away from the addicted celebration sight, hidden into the inexhaustible underground river that continues to flow and transfigure everything. Stefanos Antoniadis 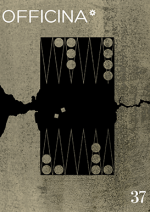